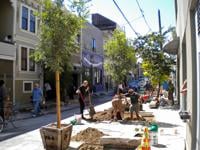 Friends of the Urban Forest members plant trees along Linden Street in Hayes Valley in 2010.


Friends of the Urban Forest

San Francisco’s urban tree canopy is one of the smallest in the nation — and some fear it’s on the decline. While the reasons for this are myriad and complex, new plantings have struggled to keep pace with removals or mortality rates, reports show, leaving thousands of sidewalk basins barren and treeless.

Trees have also been inequitably distributed across The City, which is all too clear on hot, fogless days when neighborhoods like SoMa and Bayview are degrees warmer than areas with ample canopy cover.

It’s why The City has outlined a goal to plant 30,000 new street trees in the next 20 years as part of a plan to green up underserved communities and reduce The City’s greenhouse gas emissions by using trees to sequester carbon.

But for now, the goal remains just that. Public Works, the agency that manages The City’s street trees, estimates it needs to plant about 4,000 trees a year, including 1,500 new ones and 2,500 replacements, to keep pace. But with limited resources, the agency is struggling to meet these requirements.

“The reality is, we’re not going to meet that goal because of the funding,” said the department’s interim director, Carla Short. “I think we’re sort of trying to still use that as an aspirational goal and still do our best to push for it.”

During the pandemic, Public Works’ tree funding was de-appropriated, and its staff was reassigned to disaster response teams, causing its Bureau of Urban Forestry to cancel equipment orders, freeze hiring and cease maintenance contracts. However, even once that funding was reinstated, the department struggled to get projects back on schedule.

This budget cycle, Mayor London Breed declined to allocate General Fund money to the Department of the Environment, which it requested to fund its climate action plan that includes a chapter on healthy ecosystems. Some say The City’s investment in maintaining the urban forest has also missed the mark.

“We are treading water at best with the funding The City puts toward street tree planting,” said Brian Wiedenmeier, executive director of Friends of the Urban Forest, who expressed disappointment about Breed’s decision to withhold funding from the Department of Environment.

To complicate matters further, the drought, made more extreme by a warming world, is taking a toll on the city’s trees — and not just those that push their knobby roots into the concrete.

“If you’re talking about street trees, to me, that’s just half the issue,” said Denise Louie, a native plant enthusiast who’s concerned about the fire risk posed by drought-stressed trees in The City’s open spaces, such as the tall stands of Eucalyptus in Glen Canyon near her home.

Warmer, threer conditions mean many more trees require constant watering, another service and investment Public Works and other organizations, like Friends of the Urban Forest, do not have. Short noted that watering alone makes up about three quarters of the cost of a street tree.

“The cost of planting a tree in San Francisco is a lot more expensive than places that have seasonal rains or more consistency in the rains than we do,” she said.

The entire tree population in San Francisco is under increasing pressure from the changing climate at a moment when it’s been enlisted as part of the solution. Because trees suck carbon from the atmosphere, San Francisco’s urban forest is seen as a critical piece of The City’s plan to achieve net-zero emissions by 2040, a goal outlined by the mayor last year.

“Carbon is one of the easiest benefits to see in a tree,” said David Nowak, an emeritus research forester with the US Forest Service. “You can directly see it occurring — as you see a tree grow, it’s sequestering carbon.”

But, he added, “It’s not just about the carbon. By having the forest there, you get multiple other benefits at no cost: You get cooler air temperatures, cleaner air and less flooding because the trees absorb the water … People like the vegetation, and it actually helps improve human health; it reduces noise and (boosts) wildlife.”

While Nowak asserts that both natives like Monterey Cyprus and non-native trees like Blue Gum Eucalyptus can provide such services, Louie argues that the native plants that have adapted to this region over thousands of years are best suited to boost the region’s biodiversity. “We need to appreciate what’s left of our natural heritage,” she said.

In general, proponents of native plants want The City to do more to help reestablish the native flora that was here before urbanization.

“San Francisco has taken some strong steps to expand the role of biodiversity in our urban tree selection, but we are still missing the mark,” said Susan Karasoff, a Yerba Buena Plant Society member. “To support our city’s local biodiversity, we need locally appropriate native plants, but fewer than 1% of our current trees are native.”

While Short concedes that most trees going into sidewalks are non-natives, she said she’s proud of the work being done to look for species better suited to hotter, three climates — climates that might become normal for San Francisco.

“I am a big fan of native species. However, they are often not the best choice for the built environment,” said Short, who has a background in conservation ecology. “A Coast Live Oak in a sidewalk is never going to be what it should be. It’s never going to provide the same level of benefits that it could” if planted in an open space.

But native or non-native, trees alone will not be a panacea for a warming world, Nowak said.

“To think that we’re going to plant enough trees in this world to offset all the emissions from the automobiles and fossil fuels we’re burning — I don’t think it’s going to happen. I don’t think it can happen mathematically,” Nowak said. “But I argue this: If I could only plant one tree in the world, I would plant it in an urban area.” 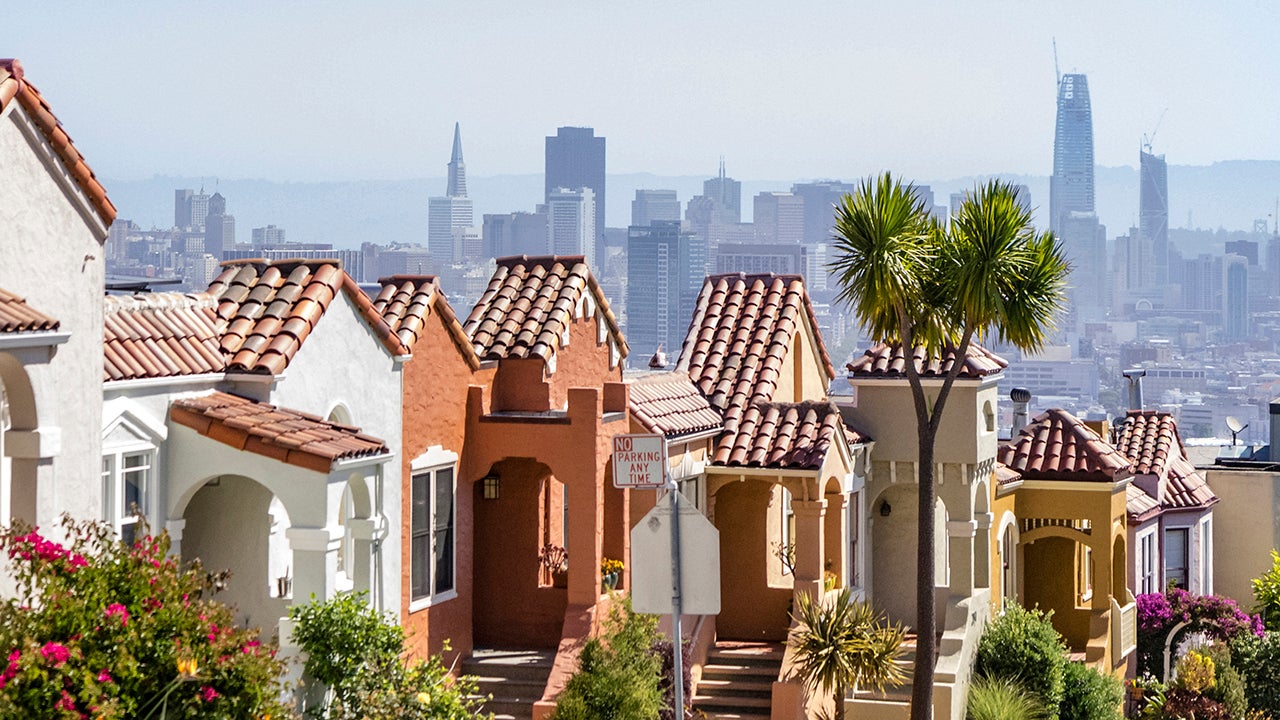 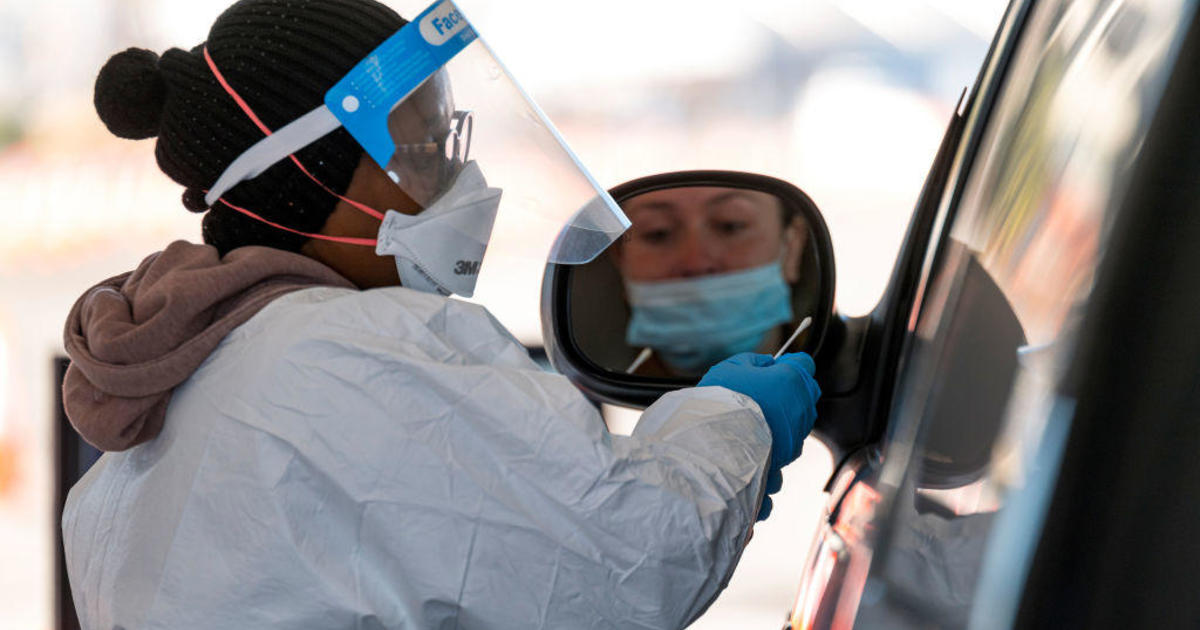