In 1918, the State Board of Health in California oversaw distribution of vaccines intended to prevent influenza, in one case relying on inmates housed at the Napa State Hospital for the Insane.

An article referencing failed vaccine trials, found in the bottom corner on the back of the front page of the Humboldt Standard, printed in Eureka on December 27, 1918.  Founded in 1876, Napa State Hospital is the oldest State Hospital still functioning.

After injecting half of the inmates there with the newly developed vaccine, it was determined that the cocktail did nothing to prevent the influenza infection.  The short article featured in the local newspaper writes that as the surrounding epidemic “gripped the hospital” the disease was indiscriminate in its attack on the hospital’s residents.

In 1918, The Humboldt Standard published a small news report two days after Christmas, which described a “serum” administered as a test vaccine at the castlesque insane asylum in Napa.  The report was sent from Sacramento, and featured a statement by Dr. Wilfred Kellogg, who was none other than secretary of the California State Board of Health at the time.

The subjects of the described event were inmates of the insane asylum, likely having little to no input on their involvement in the experimental project.  At that time, parameters on medical trials were only just being considered, and informed consent of people involved in trials of new medicines or “treatments” were only put in place after World War II, decades later.  Ultimately, the inmates who were exposed to the virus suffered equally as those who were potentially inoculated with the tested vaccine.  The trials proved the vaccine useless, as would be the case for every influenza vaccine attempt until scientists discovered that it was not a bacterial infection at all, but a virus.

An historical account of the building’s operations reads, “Napa Asylum opened in 1875, it quickly filled to capacity and became home to many people suffering from mental illness, alcoholism, grief, and depression.” [Photo From Napa Valley Register, unknown date]

The article reads in part, “The authorities claim that when the epidemic gripped the hospital there was no distinction in the cases, those who were vaccinated taking down as quickly as others who had received no injection. This bears out the report of the American Public Health Association Committee on the use of vaccine, according to Dr. Kellogg.”

At the time the vaccine test occurred at the facility, the sprawling estate was full to capacity, even reporting an overcrowding problem in the following year into 1920, when the infection was still circulating.  The report continues, “[Dr. Kellogg] said that the fact that the live organism of the influenza bacillus had not been isolated precluded the dependable use of vaccine to prevent infection.  Dr. Kellogg said he did not think the present recurrence would hold out much longer, but that there would be occasional cases throughout the winter.”

As many Public Health Officials today can understand, Dr. Kellogg was reluctant to say that the influenza epidemic would come to an end definitively.  As with the influenza pandemic of 1918, the current COVID-19 pandemic has likely also evolved into an endemic illness which may need seasonal booster shots of vaccine as a reliable prevention.  Nowadays, vaccines developed by private companies in the US are tightly controlled and regulated by multiple checks and balances, quality control measures as well as oversight by health officials at the CDC and FDA.

A rare front page sample of the 1918 newspaper printed in Eureka, the Humboldt Standard, “a growing newspaper for expanding Humboldt” discovered in Old Town, Eureka last month included a short snippet about an attempted vaccine trial in nearby Napa.

The 1918 experimental application took place not far from secluded Humboldt County, where the virus was gripping homesteads and the relatively, densely populated city of Eureka at the time.  The word of the day, and any excitement from Washington or abroad, was transmitted across the “wire” to local newsrooms regularly, and was promptly organized into print for distribution to the people.  The newspapers of the time were largely focused on all that was related to the war effort, and the ongoing international scandals erupting from the Bolshevik Revolution unfolding in Russia.

The headline on the front page of the Humboldt Standard on December 27th, 1918 reads: FORMER CZAR OF RUSSIA NOT DEAD” while others just below read, “FOURTEEN POINTS ON PEACE ARE ANALYZED” and “FOREIGN ARMY MAY BE SENT TO BERLIN” alongside another reading “ROMANOFF ALLEGED IN HIDING; ALLIES KNOW WHEREABOUTS”.  As the local paper tied together bits and pieces of international drama and intrigue, the influenza outbreak continued to spread across the world with the aid of military transportation.  The virus traveled with the soldiers.

The only new tool in the infectious disease control toolbox was the development of vaccines as a prevention to getting ill in the first place.  With various pharmaceutical drugs and treatments available in modern times to lessen the duration or severity of illness, referred to as “therapies” by medical professionals, there are only mitigation measures in the absence of an all-out cure.  While there were no successful vaccines developed at the time, it wasn’t for lack of trying.

Even though there were efforts to tackle the virus using medical knowledge and prevention measures, a vaccine would not be found viable against the flu until the 1940’s.   At the time, scientists were under the mistaken impression that the flu was bacterial, rather than viral – a fundamental mistake that would not be realized until over a decade later. Out of several attempted varieties, including one developed  by what is now known as the Mayo Clinic, none were found to be effective in application.  Scientists wouldn’t figure out until over a decade later,  that the illness was a virus, not a bacteria.  The public would endure two more decades of seasonal flu epidemics until a viable vaccine against the bug was developed.

The country is estimated to have lost over 600,000 people to the rampant influenza infection over the course of more than two years, from the spring of 1918 to sometime late in 1920.  In comparison to today’s effects from COVID-19 on a much larger, more densely situated population, the US has lost nearly as many lives to date, since the outset of the SARS-CoV-2 pandemic in the spring of 2020. 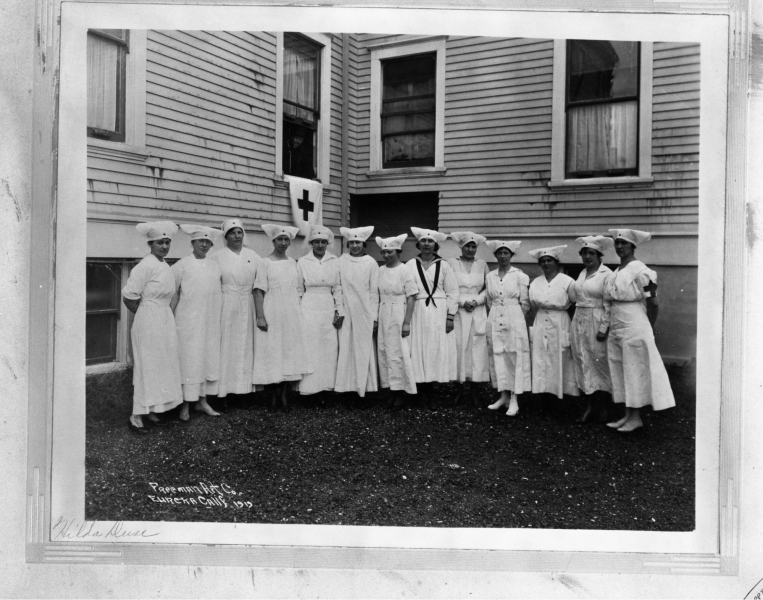 Humboldt was hit hard in the winter of 1918, after nearby Sacramento and San Francisco had already had a difficult springtime and fall.  The first reported cases of an unusual flu appeared in the U.S. Army camps of Kansas in early spring of that year.  Spain was neutral in World War I, and so the Spanish press was able to print news about the spread of the disease before most, and thus the initial press about the pandemic came from Spanish news sources, leading to the misnomer “Spanish Flu”.

In that pandemic, the world lost a significant portion of its population as a result of the virus spreading rampantly for many seasons.  It began in 1918 and did not come to an end until 1920, estimating a world population reduction of between 1% and 5% by the end of the pandemic.  Studies suggest that this was the last recorded time in history that the world’s population actually declined over the course of those two years.  The development of a vaccine to fight the influenza bug was under way, but proved fruitless for decades.  With the advancement of science over the last century, has also come the development of new medical technology, including vaccines that do the intended job of precluding infection to a degree sufficient enough to prevent illness from spreading between individuals. 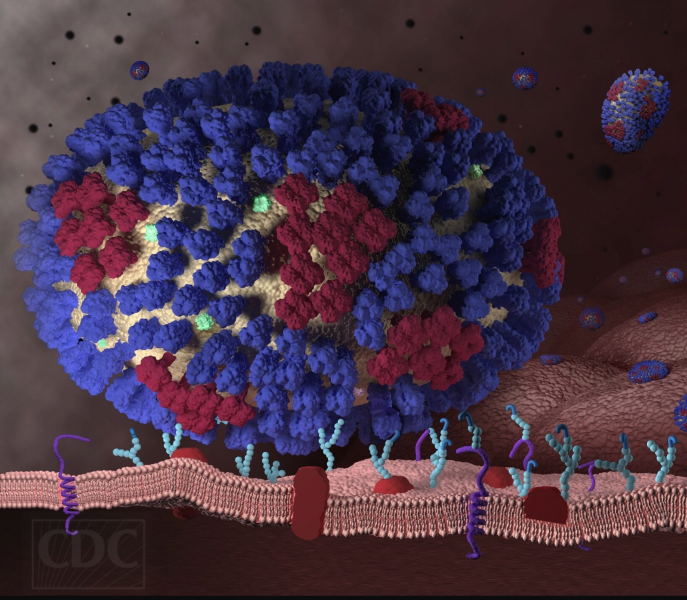 A computer-generated image of an influenza virus, from the CDC.

As the second wave of the pandemic flooded through the west in the fall of 1918, a bulletin was released by the nation’s Surgeon General making it known to the public. Brief, but clear, the  Blue Lake Advocate printed in October, “UNCLE SAM’S ADVICE ON FLU U. S. Public Health Service Issues Official Health Bulletin, on Influenza. LATEST WORD ON SUBJECT. Epidemic Probably Not Spanish In Origin—Germ Still Unknown—People Should Guard Against ‘Droplet Infection’—Surgeon General Blue Makes Authoritative Statement.”

According to the local historical accounts of what happened in Humboldt County, hospitals were ill-prepared when the Great War brought with it a pandemic that challenged the frontier society of Humboldt County almost as much as it did the booming urban metropolis of the San Francisco region, and everywhere across the globe.  Not only did influenza spread quickly in Humboldt, but the mitigation measures employed to stop it were not very different than what the Center for Disease Control recommended across the board for stopping the novel Coronavirus at the outset of the COVID-19 pandemic:  Masking, distancing, handwashing, and ventilation were the focus of basic infection control, then and now. 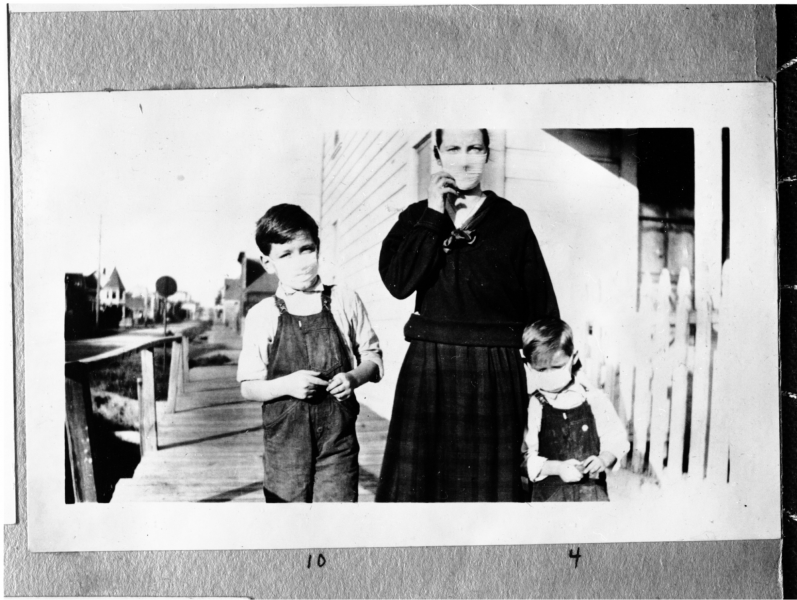 Dr. Kellogg in 1918, being the secretary of the California State Board of Health, was responsible for developing mitigation strategies and promoting knowledge of basic public health measures to the public.  He wrote on the subject, and conducted “experiments” in the scope of his research on masking as well as vaccines.  “In the absence of scientific epidemiological information concerning this disease, local health departments are warranted in trying any plan that appears to offer any hope whatever.” 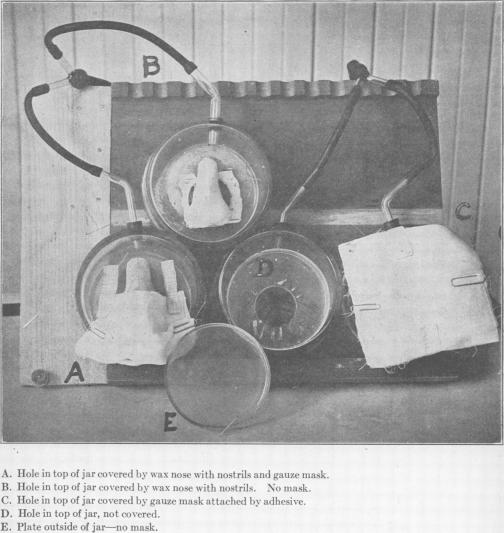 Photo of equipment Dr. Kellogg used to test gauze homemade masks, featured in a study he provided to the State Board of Health in 1920.  Kellogg was not convinced that masks made of layered gauze were being used effectively, and hence did not consider them reliable as a measure of infection control.

His experiments on the effectiveness of masking were elaborate.  He used layers upon layers of gauze, methodically, used an atomizer to replicate the airborne nature of the particles of the flu, and even relied on a replica nose made of wax, to assist in the experiments.  Dr. Kellogg went on to say that the State Board of Health should preserve its integrity in prescribing suggestions to the public, warning that misinformation would cause great harm to the public.

There was no successful vaccine to fight the spread of the influenza scourge.  It swept the globe largely unchecked, ultimately killing somewhere between 17.4 million and 100,000,000 people across the world.  The Influenza of 1918 only stopped threatening lives when the entire world’s population had been exposed, and natural selection had taken its toll well into 1920. 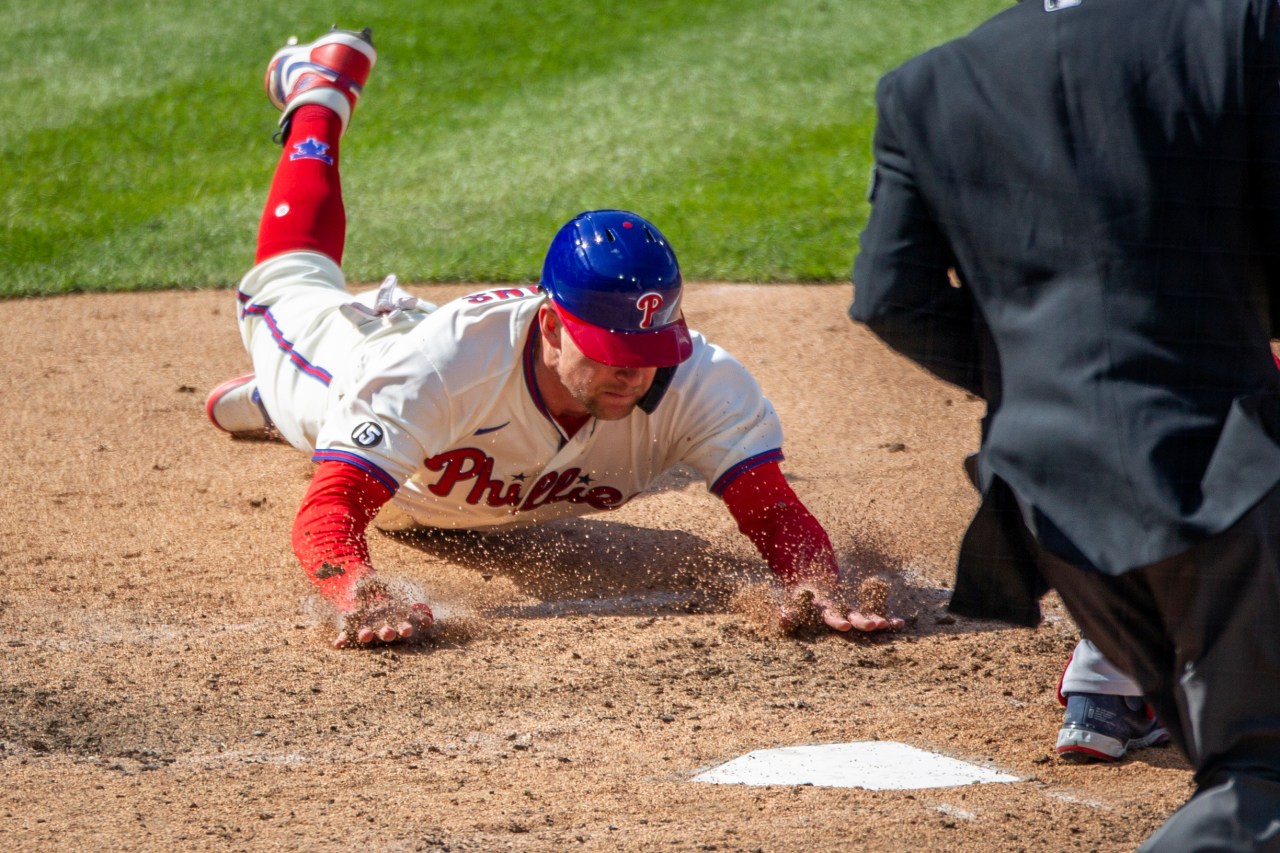 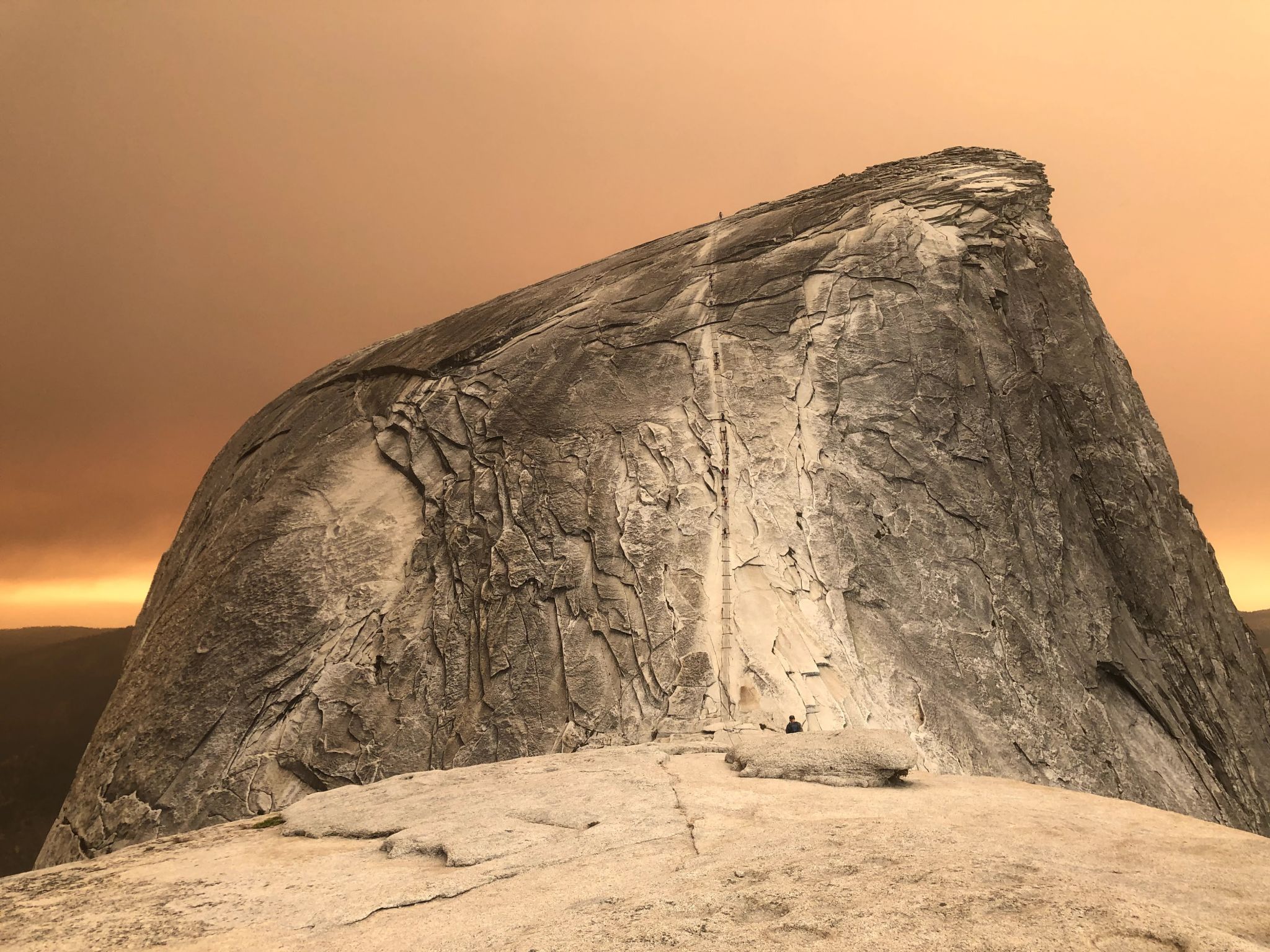 ‘The sky was so darkish it was laborious to see’